Up at Heretical Ideas: Ashcroft may be getting the boot in Bush’s second term—if there is a second term, as seems increasingly likely over the past week—and things seem to be going to hell in a handbasket in Iraq. On the latter, Alex Knapp says “the President won’t talk about it”; frankly, I’d rather he did something about it than talk about it, talk being cheap and all.

Prof. Eric Muller gets an email from Alec Rawls, son of the late philosopher John Rawls. Here’s the email:

It really is astounding that you can continue to grasp at straws in order to make scurrilous attacks. Are you ever going to vet one of your own charges for accuracy before you post it? You are such an incompetent asshole. Crawl back in your hole. Or let Michelle keep chopping your limbs off like Monty Python's Black Knight. Either way, moron. I presume you are taking comfort from all the brain dead bigots in law schools across the nation who don't want to know the truth about internment. You are their champion! Enjoy it, because amongst honest people, you are exposed as a complete fraud, now and forever.

Not only is Alec Rawls an utter jackass, he’s also a misogynist:

Faced with an invader, the combination of woman’s instinct to submit, and the tendency for her political thinking to revolve around the personal, can be a disastrous pairing for a nation that allows women to vote. The problem is even worse in Europe because European society has become thoroughly feminized. The European man no longer thinks like a man.

I wonder if Alec has been blogging under the pseudonym “Kim du Toit”?

Sadly, this apple fell pretty far from the tree.

FedEx Kinko's: When it absolutely, positively has to be forged overnight

The Washington Post reports that the Bush guard memos were faxed to CBS News from a Kinko’s location in Abilene, Texas, which just happens to be down the road from Bill Burkett’s home.

On the other hand, it’s possible that CBS producer Mary Mapes (or some other person working on the story) faxed the documents to New York herself while in Abilene pursuing the story, and Burkett was uninvolved. So it’s hardly a smoking gun as to the source of the documents.

Also, the WaPo account quotes, on its jump page, a comment (attributed to Bill Burkett, although there’s no way to authenticate that it is genuine) from this comment thread at Steve Verdon’s weblog, Deinonychus antirrhopus. Interesting… (þ OTB)

Update: Via Jim Glass in comments at Tom Maguire’s place, WaPo writer Howie Kurtz has part of an interview with Rather:

"If the documents are not what we were led to believe, I'd like to break that story," Rather said in an interview last night. "Any time I'm wrong, I want to be right out front and say, 'Folks, this is what went wrong and how it went wrong.' "

Glass says “It's a little late for that, Dan.” Six days and counting, I think.

“60 Minutes II” doesn’t air in Jackson until 1:35 a.m. overnight (in its place was some sort of TV movie). What does my TiVo program guide say is on the show?

A hoax some consider responsible for helping launch the war in Iraq; actors Matthew Broderick and Sarah Jessica Parker talk about their life and marriage.

Signifying Nothing has obtained a copy of the “hoax” originally scheduled to be presented before Rathergate started: 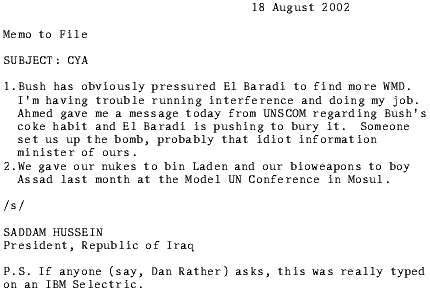 It’s all so obvious now.

Update: Here’s a genuine image from the CBS website that apparently comes from the “picture worth a thousand words” department:

Of course, that’s Dan’s boot on the shovel.

As anticipated, CBS’s new defense is that the sentiments expressed in the memos are real, even if the documents themselves are forgeries.

In other words, the memos were real before they were fake.

Plus, I think CBS and Dan Rather might be upset that George W. Bush outsourced their camels.

Now it all makes sense:

I’ll bet that Dan Rather didn’t get to sleep with Jennifer Garner.

The local roundabout fetish is spreading…

You can tell that things are going badly for the Democrats when the New York Times says the silver lining is that the forged memos are somehow “accurate” despite being, by any objective or sane standard, complete fabrications. I hate to break it to the Times, but this isn’t the Critical Studies department; this is the real world, where we have these neat concepts like “empiricism,” “evidence,” and “temporal order,” not to mention “Word didn’t exist in 1972.”

Such concepts do not appear to hold sway with anti-Bush smearmeister Bill Burkett (a Kerry and DNC fundraiser, not that the Times bothers to mention that in its article) or his attorney, mind you:

Asked what role Mr. Burkett had in raising questions about Mr. Bush’s military service, Mr. Van Os said: “If, hypothetically, Bill Burkett or anyone else, any other individual, had prepared or had typed on a word processor as some of the journalists are presuming, without much evidence, if someone in the year 2004 had prepared on a word processor replicas of documents that they believed had existed in 1972 or 1973 – which Bill Burkett has absolutely not done’’ – then, he continued, “what difference would it make?”

Update: Jane Galt has more on this theme:

So if I honestly believe that Bill Clinton had Vince Foster killed, and gave written orders to someone to do so, it's okay if I go ahead and type up a couple of memos to that effect and hand them to the press… and okay if the press runs with them.

The Rather Doctrine spreads . . . and my job just keeps getting easier. By next week, we're going to give up printing news entirely, and give our pages over to Tom Clancy.

Sometimes when I read Andrew Sullivan I wonder what they actually teach in the political science department (I'm sorry, I mean “Kennedy School of Government”) at Harvard. This item provides yet another example:

BORN-AGAIN DIVORCE: A new survey finds that born-again Christians are just as likely to get divorced as everyone else; and, in some instances, seem to have a higher rate of divorce than others. Jesus, of course, was explicit in his condemnation of divorce (unlike homosexuality). A large majority of born-again Christians disagree. Just don’t call them cafeteria Christians. They have their focus on the real threat to marriage: those who have always been barred from marrying.

I do hope Sullivan is aware that born-again Christians (however defined; the survey linked by Sullivan uses a question format that probably would inflate the number of “born-agains” versus the normal approach of asking the respondents whether they consider themselves “born-again Christians”) come in many political stripes, and many of them (including probably a higher proportion of those who are divorced, who would tend to be more liberal) support same-sex marriage. But why let the facts get in the way of a good smear against Protestants?

Ironically, of course, those who tend to agree with Sullivan in his Quixotic crusade to restore covenant marriage as the law of the land are also the least likely to approve of same-sex marriage, Sullivan’s protestations that favoring gay marriage is actually a “true conservative” position notwithstanding.

Update: This page may help explain the title of this post.

Another Update: Conrad of The Gweilo Diaries also has quibbles with Sullivan’s fixations as of late.

Colby Cosh nominates a post by Evan Kirchhoff, no Bush fan, as “Best Thing Written On The Subject” of RatherGate. I tend to agree; go read the whole thing, as it’s absolutely merciless throughout. Meanwhile, Susanna Cornett dismisses the idea of Republican dirty tricks, apparently the “out” CBS is going to use for this scandal, as being rather (pardon the pun) lame:

Evan Kirchhoff also has some free advice for his fellow Democrats:

I’ll let you in on a secret: until the recent memo fiesta, I was 100% certain that Bush was AWOL in some sense from something at some point in Texas, since I vaguely remember this going around once or twice before (insert typical rumor about alternative service with Captain J. Daniels, if you know what I mean). Thanks to the CBS/DNC revisitation of the issue, I have boringly learned that there was some kind of flex-time system that operated with an annual “points” scale, and apparently (as I understand this) if you look at Bush’s attendance points, they line up adequately. So now I’m apathetic about AWOL at both the regular and the meta-level.

Currently there are about 7 weeks remaining until the election. If you like, you can spend another two or three of them trying to reverse this conclusion, and if you dig hard enough you might discover that Bill Gates has a time machine he hasn’t previously disclosed to shareholders. But I really think you ought to consider the pure opportunity cost of that project, because with the month nearly half over, it’s starting to look like the entire campaign plan for September consisted of a handful of pseudo-kerned .doc files and Kitty Kelley’s Bush the Coke-Huffing Monkey.

While they’re at it, the DNC might also want to look into finding some campaign workers who actually know what John Kerry stands for. Now, granted, that’s perhaps difficult given Kerry’s own Heisenbergian tendencies, but at least some minor effort on that front would be nice.

I just downloaded Mozilla Firefox 1.0 PR, and like BigJim I’m liking the new Live Bookmarks feature immensely—it reminds me a bit of the approach David Janes took with BlogMatrix Jäger, but the Mozilla approach is significantly less featureful (for starters, I can’t see any way to go to the root URL specified by a feed, and it doesn’t keep track of what you’ve read in any way that I can tell; nor does there seem to be a way to add a RSS feed without a LINK element—so I can’t add the Chronicle of Higher Ed feeds). On the other hand, it’s integrated in the browser nicely, and you can put a folder of feeds in your Bookmarks Toolbar, and use the menu to surf posts seamlessly (so it doesn’t take up real estate when you’re reading), or you can open the “Live Bookmarks” in the sidebar. And it does have Atom support, which is nice. So, for now, I’ll give it 3 out of 5 stars.

In other changes, it looks like Gtk theming has changed slightly yet again, and apparently the “disappearing cookie” bug has been somewhat, but not totally, squished. And it does seem a little more zippy than 0.9.3 did on my Linux box (though that could just be due to the Mozilla.org builds being i686 builds, as opposed to Debian policy-compliant i386 builds). So it seems like a worthwhile upgrade.